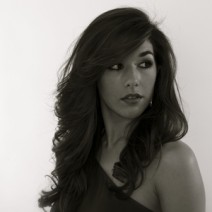 “…a jazz singer with a global perspective…” – THE NEW YORK TIMES

“…Thana Alexa stood out, turning a style of scatting that’s become cliché into something entirely
new, evocative, and exhilarating!” – BILLBOARD

“Her voice is enthralling, her compositions are heart-warming and her arrangements are heart-
stopping.” – JAZZTIMES

2016 and 2017 Downbeat Critic’s Poll Rising Female Vocalist, runner up in the 2014 Made in NY Jazz Competition, winner of the 2011 Jazzon Alpe-Adria International Competition and nominee in the category of Best Jazz Composition for the 2011 PORIN Awards – the Croatian Music Academy’s honor equivalent to the Grammy Awards in America. Thana Alexa released “Ode to Heroes”, herHarmonia Mundi Jazz Villagedebut in March 2015, an album of original compositions and vocal arrangements, which bring together elements of jazz, pop and world music.

On her upcoming album (set for release in 2018) Thana dives into the exploration of textural soundscapes, vocal effects and the importance of making a relevant statement about our time through art. This crossover album integrates elements of jazz with soul, electronica and pop, opening a door of accessibility and appeal to sophisticated music for wider audiences without diluting its complexity and depth. It makes a strong statement about the role women play in music and in the world – a role that makes female influence and strength undeniable. The album explores the vastness of humanity and our duty as people to be the change we want to see in the world.