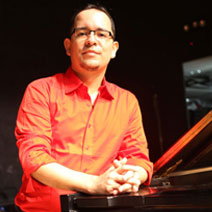 Gabriel approaches each student as a person, finding the potential to succeed in music. Having classical training from age five gives Gabriel a great teaching perspective. He has a profound knowledge of piano techniques, postures, projection, sound, as well as harmony and rhythm, and he has developed a wide variety of fun routines to practice. Gabriel develops with students the basic fundamentals of the instrument, and is proficient teaching classical, jazz, and Latin music. Gabriel has taught for over 18 years, and he holds Bachelors and Master’s degrees from The New England Conservatory of Music. For more about Gabriel, visit www.GabrielGuerreroMusic.net.